As I've mentioned in previous posts, I grew up spending my weekends & summers in a small cottage with no bathroom in the woods with all of the creepies & crawlies. I do not have an aversion to animals big or small.

Recently though, I have become a victim of a sinister mind control conspiracy involving highly evolved bear psychologists. Why? Who knows. They are probably using my vegetarianism, animal activism & general compassion for animals to their advantage. The bears have a message & I am not yet sure if it's world domination or just a nudge to "Get the fuck away from my berries".

Parental unit MaryAnne always liked bears, specifically grizzlies. I will always remember the vast amount of discovery channel bear documentaries I watched growing up.
To be fair I watched a lot of animal documentaries in general... I'll never forget crying watching a pack of mean camels gang-rape a lady camel with a baby & thinking "OH MY GOD CAMELS STAHP! MAKE IT STAHP!" But there were a lot of bears.

We used take the big, brown van over to the dump at the lake & watch the black bears chew the heads off of barbie dolls. Just sitting there shinning our headlights on the bears. Bears don't give a shit. 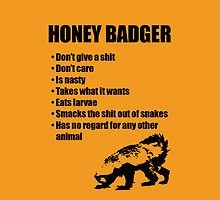 Occasionally we'd come to the lake & there would be a bear trap on the foot trail across from our cabin. Once the bear came in to our yard from behind the outhouse & proceeded to climb the birch tree, flap his big bear paw across the bird feeder to knock it down & run his bear fingers across the feeder to collect & eat sunflower seeds. Another time the bear lifted the lid off of the barbecue & licked the meat juices off the grill.

Following these events, MaryAnne collected bear brochures to research how to not get eaten by a bear. She spent much time instructing a solemn little ginger girl how to make herself seem bigger & scarier than the bear (????) We spoke about how you would be likely to smell the bear before you see the bear & that you run like hell when you see a baby bear because momma will be close by & mama is a psycho. 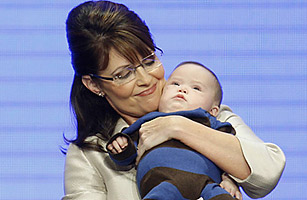 One day on a canoeing trip with MaryAnne & MaryAnne's sister, we were paddling up the river minding our own business when the littlest Berenstein bear jumps off a rock & doggy paddles across the river directly in front of us. We scream at each other to paddle & to hurry & in a panic, we end up back paddling ourselves right to the shore of where the baby bear jumped & basically presented ourselves to mama bear with a side of BBQ sauce. Luckily/sadly for little Berenstein bear, no mama came to eat us.

I haven't seen any notable live bears since then, but they still will not let me out of their grasp.

For the past 5 or so years I've been dreaming about bears. I'll always be in the forest & come across a big mean bear. I'll run away but no matter where I turn, another bear will be coming out of nowhere to high-five the initial bear & gang-gobble-me-up.

The pseudo-Freud dream dictionaries all say different things about the presence of a bear in a dream.
Some say it means the cycle of life, Independence, overwhelming obstacles. Others note financial loss. Even suggesting bear is a play on 'bare' which denotes vulnerability. Basically, you suggest an idea or an emotion & that's what bears signify.

On the positive side, there was about a week where I become obsessed with bears waving:

On another positive side, there's this sneezing panda bear:

Then...on the negative side, there's a new found perma-fear of bear attacks like the ones CNN is reporting on today:

People who didn't listen to Rebecca

Of these pictures of a bear attack up north: 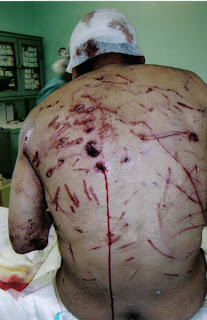 And finally... there's Mister Ford, who has gifted our entire family with a bear sub name.
He refers to himself as 'Huckleberry-bear'. The ferret is a 'little Ferry-bear', the cat is 'Bobert-the-bear' & so on & so forth.

With this overwhelming evidence I have no choice but to conclude that the bears have some mind-bullshit going on in my head for their bear tests.

Just when I thought I might be going a little batty, more evidence brings me right back to reality:

Look at this bear in my bed! 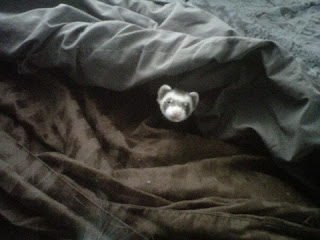 Then I get temporarily moved to another building at work & who should be here ruining my productivity: 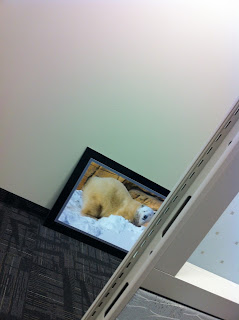 Then I get a sweet tooth at work, what should be available to quench it!?!? 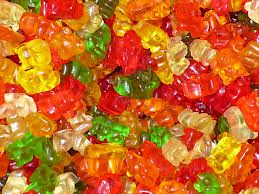 And these pictures are just the conclusive evidence. Who else knows what the bears have done without getting caught. All those things I blamed on the dogs. 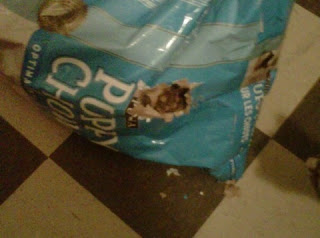 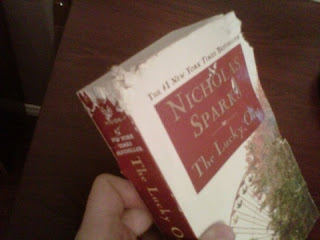 Bears are real. Bears are right outside our front doors. We should be making films about bears getting caught in tornadoes & killing Tara Reid!The sooner we accept this & start to really fear them, the sooner we can learn to protect ourselves.

Look what this freaking bears did to this car:

Take cover. You have been warned.

Some *other* things for the people on Maury to do

I watch a lot of Maury. 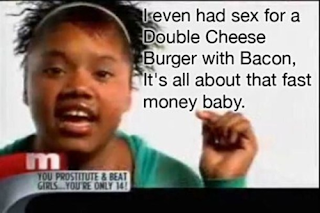 Maury is sometimes all that can calm my neurotisism & anxiety. A lot of the time I just have it on for the white noise, habit & routine. Other times I pay attention to the stories, am entertained by the ironic jibbering & plot skimming. 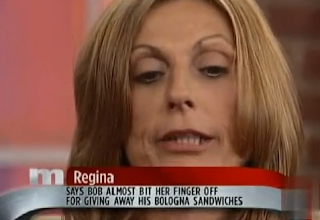 Sometimes I just feel reassured to watch people out there with way more personality problems than me. It's kind of like hanging around a hospital when you're casually sick or a seniors home when you feel like you're getting old. 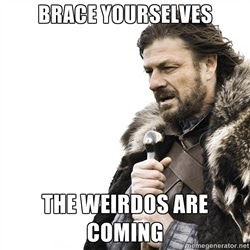 What concerns me about Maury is all the poor little babies whom, without some miraculous intervention, will surely grow up to be the product of their environment.
It's like when they play the 'wild & crazy teen girl' themed shows where the moms come in at their wits end.
Bless their hearts for having the balls to come on national TV but girlfriend, I got some questions for you that the Maury producers don't seem to want to ask.
What do you do for a living? Where do you live? At what age did you have your children? How many children do you have & most importantly, wheres your baby's father!?!?!
In the eternity that I've been watching Maury I can count on one hand the number of dads coming on with their wild, crazy & out of control teens! 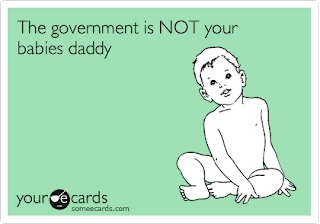 In any case, I feel it comes down to a lot of 'accidental' pregnancies. And it pains me to use that word because as liberal as I am, I don't believe that there are very many situations that constitute a baby being created by 'accident'. You 'accidentally' had sex with your mother's brother's girlfriend. We 'accidentally' ended up in the same room without any pants on. We didn't have a choice!

After careful analysis & soul searching, I've thought of a way that I could help to end accidental pregnancies. Before I could do that, I had to realize the problem & what was causing them. The problem is.. boredom. 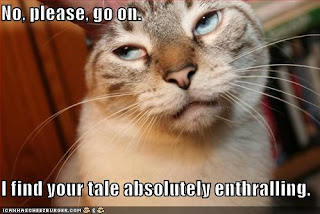 My more educated counterparts might say that it's a lack of self-control, forethought, education & resources, cycle of poverty etc etc... but come on now, I don't want to sound like I'm stereotyping here, but when it comes down to it I'm willing to bet dollars to donuts that the majority of the men & women on Maury are unemployed. That frees up a good 9-10 hours a day when you factor in travel time. That coupled with lack of income means that there is little money to entertain oneself with.
I've concluded that all these Maury babies are being created because sex can be fun & it can be free.

For your consideration Maury, I have created a list of free, enjoyable, sex-free activities for you to suggest to your guests. You can thank me later.

1. A good, long, stretch.
2. Filing ones nails
3. Going for a brisk walk
4. patting a cat or dog
5. Reading a Berenstein Bears book from the library
6. Writing a short story
7. Taking a hot bath
8. Volunteering at a school
9. Running through a neighbour's sprinkler
10. Talking to your neighbour about your shared interests
11. Cutting out a bazillion coupons like the women on TLC until the store has to pay out your overage in gift cards
12. Building a fort out of sheets
13. Jumping on your bed
14. Giving yourself a romantic foot massage
15. Making a craft from a toilet paper roll

They really should have some kind of a guest relations consultant & it really should be me. People might say I am judgmental but if you have been on Maury 18 times trying to find the fathers of your 6 children, girlfriend you are not being judged enough! 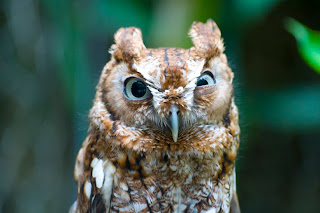 Posted by Crouching tiger, hidden ginger at 11:34 No comments: