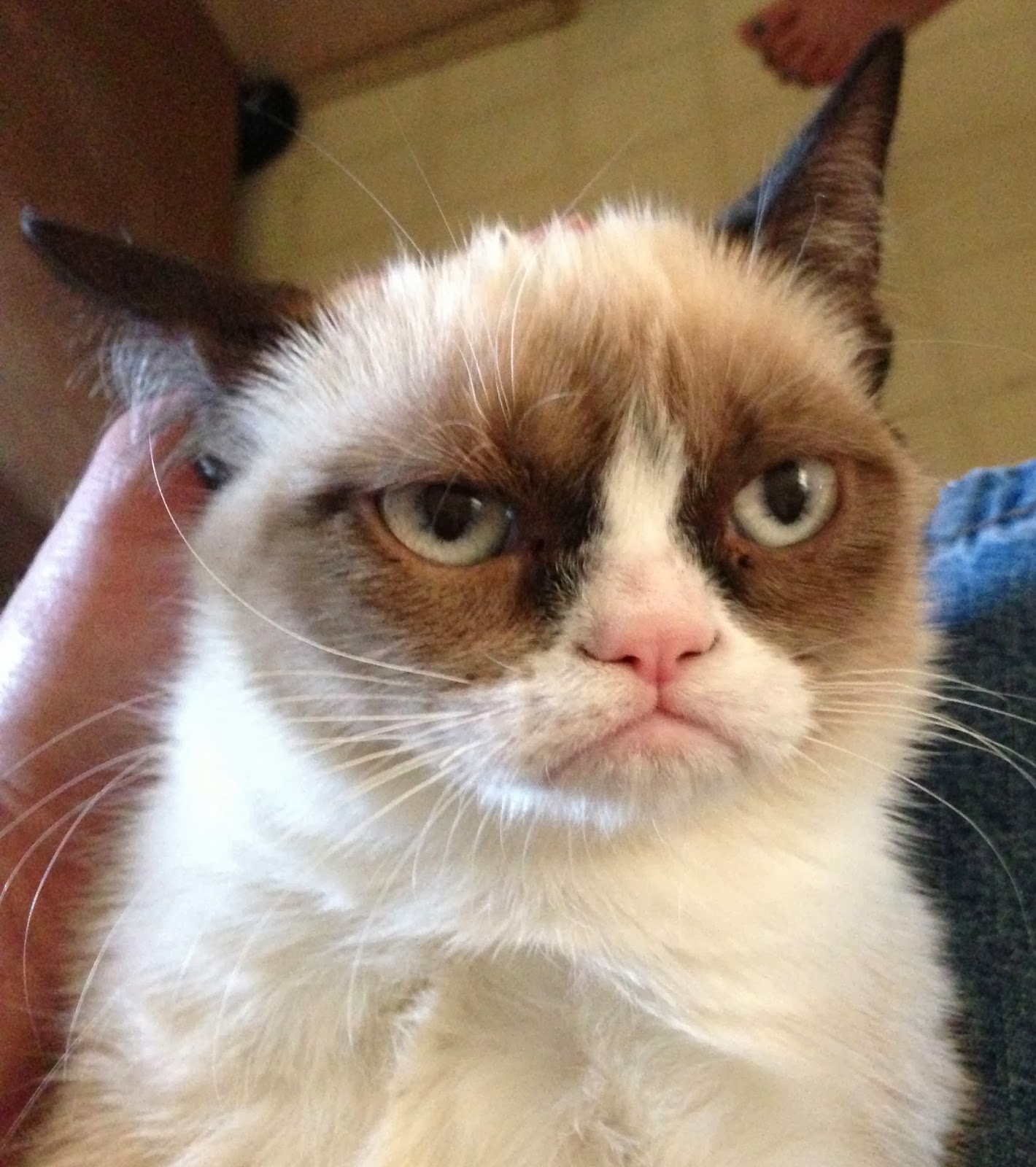 For my readers in other countries, Google defines this as "Make a whistle, shout or comment of a sexual nature to a woman passing by".

I am no longer the insecure little girl that takes the derogatory comments of a complete stranger, usually one that is not my age (or one who would interest me in any way) as a compliment.
I take a lot of pride in how I present myself. I do this for me & for my husband, not for you strange old men/horn dog kids.

I'm not sure why I experience so much of it. It could be because I do a lot of walking, don't live in the suburbs, or because my hair makes me stand out. 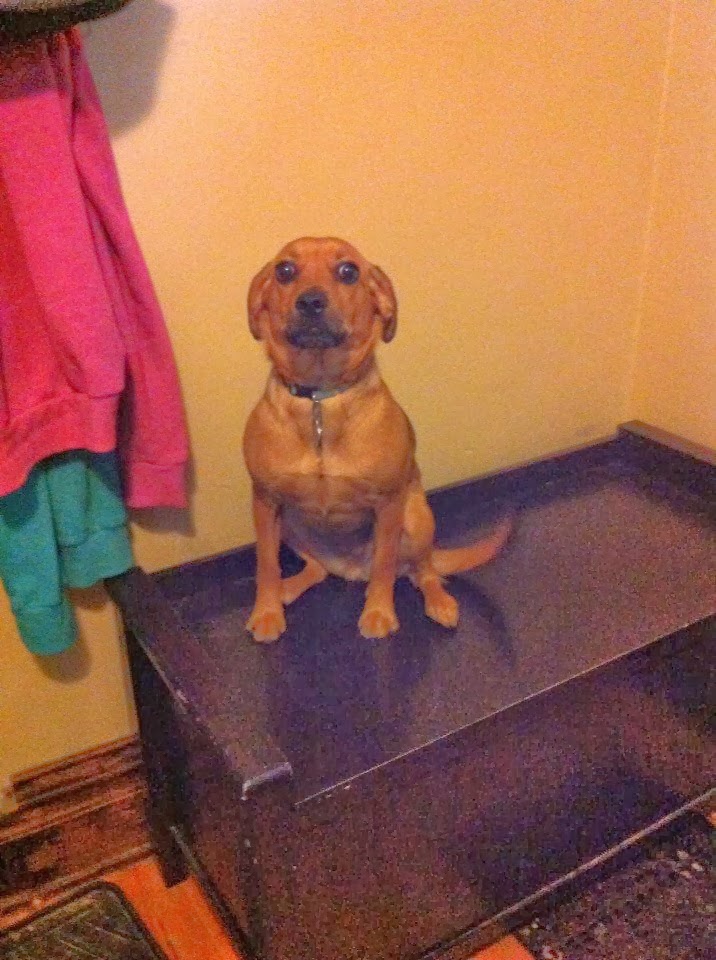 Yesterday in the early evening I stopped at the LC (Note to non-Manitoban readers, LC is the Liquor Commission) before heading home.
Per the norm the was a panhandler outside asking for change. Not per the norm, he also must have also felt, 'meh, I'm already being an asshole asking people for money, why don't I just ice the cake & yell derogatory remarks at young women'. So he proceeded to call me honey & yell after me about how my butt looked when I walked (good).

At that point, I had already decided that he should leave based on the pan-handling.
Why should I, as a customer trying to spend money on a business's private property, need to feel pressured to give out money to a serial panhandler? Maybe I over think things too much, but seriously, standing outside the LC is a dick move. You make people feel really bad & obligated to donate to your cause. It's not like we're going in to the LC to buy milky & bread or pampers for our babies. We're there for a 'luxury' item. Also kind of making a mockery of the relation between homelessness & addiction/substance abuse... 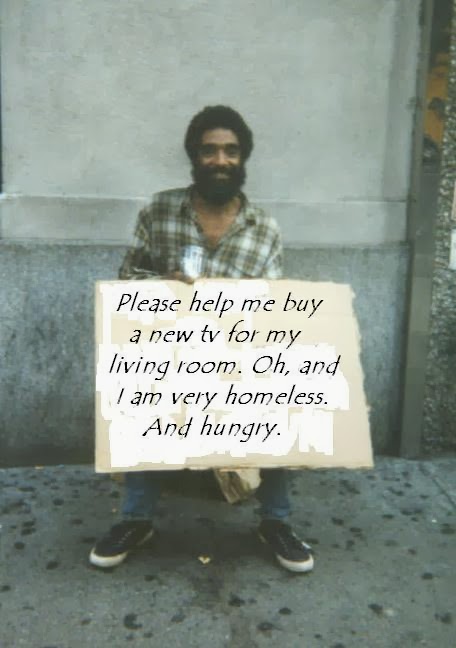 In the past I have approached LC security & let them know about panhandlers. They've always responded promptly & courteously & gotten the individuals to leave. I watched the security guard go outside & expected the same results once I saw the guard re-enter as I was in line with my purchases. 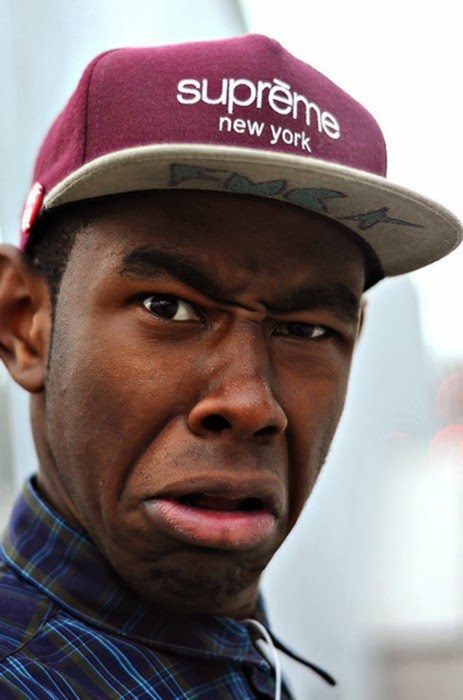 Me: "Of course, that's sexual harassment & it's illegal"
Skeezeball: "I just wanted to tell you that you're a beautiful woman. Why you gotta be like that?"
Me: "You're messing with the wrong girl"
Skeezeball: "Yeah, suck my dick"

I didn't want to suck his dick so I called police non-emergency as I walked away & was called by a constable within 15 minutes to give more detail.

But you know where the crime here really lies? I now feel bad.

I'm going over the scenario in my head analyzing whether I truly felt in danger or not, what that constable would be able to do & if they thought I overreacted. I even thought about the skeezeball & whether he was raised to believe that kind of talk was normal & thinks I am a prude.

I feel like people might wonder what I was wearing. And for the record, it is minus 30 (Celsius) outside & I am covered head to toe. But really, even if I was exposed, what makes this guy think he has the right to speak to me disrespectfully? As if showing skin (what measure of it I don't know) makes me some kind of a prostitute who should be objectified.

This brings up the 'slut shaming' conversation which merits a lot of thought.
As you may have guessed from other posts here, I tend to call a spade a spade & get coined as judgmental because of it (funny that I should be JUDGED as being judgmental). 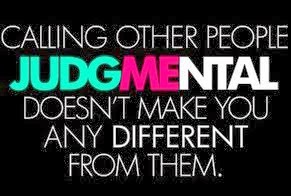 Well, if forming a personal opinion on someone based on what they say & do is judgmental, then I guess I'm an asshole. Life is short & I value my time too much to spend it around people who disturb, infuriate or depress me. That's what work is for.
For that matter? I have no idea why society is so obsessed with this notion of 'Don't judge me!', In my opinion, the only situations where this is relevant is when you are being judged based on age, appearance, gender, sexuality etc (i.e. things that are out of your control). But everyday I hear more and more of this 'I do irresponsible things, don't judge me!', 'I act disrespectfully towards others, don't judge me!' it's lost it's very valuable message of being unbiased & is now a catchphrase for those that do not want to held accountable. A world without judgement, to me, sounds like a world where people do not have to be responsible for their actions...but I digress. 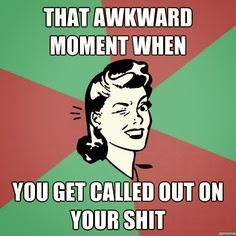 With this kind of mentality, it's tough to be both a feminist & a realist.
I've always felt that if you act & present yourself as a victim, you'll be treated like one. And although I feel that a woman should be able to wear whatever she wants, be out as late as she wants in whatever neighborhood she wants & that none of these points should ever be a reason for us to accept any sexual harassment (or worse) she endures, I still ask myself what I would teach my own daughter.

When I was in the ninth grade one of my closest friends & I would walk home together until a point when we had to part ways to go to our respective neighborhoods.
One day after we had parted some monster grabbed my friend & sexually assaulted her until she had screamed & fought enough to scare him off.
Its cancer to the soul knowing that we were just blocks away from one another. I cried for hours when I got home that night & my grandma hugged me as if it was me that got violated by some sick pervert.
She said "I can't believe this is what your generation has to deal with. You can't even walk home safely from school". No, apparently we can't.

Unfortunately the answer is that I will teach my daughter to walk in groups. I'll sign her up for martial arts & I"ll teach her to keep a safe distance from people.
I'd like to think that I'll do all of this because my kid's life is too valuable to be used as a statement & her safety is the bottom line.

So that got me to thinking that most other parents probably feel the same way.
So if we continue to teach our daughters to be prepared for this kind of treatment, what is going to prompt a change in this societal norm?

This article spoke to me & is really worth the ten minutes to read it. It's our male children:

We need to raise better boys & not let this bullshit of 'boys will be boys' slide.
I don't know how easy it would be try to get boys & young men to put themselves in our shoes but I do know that most if not all boys have a woman in their life whom they love. Be it their mom, aunt, grandmother sister, whatever. I think they need to be taught young how they would feel if this were to happen to their sister so they can also grow in to men who take a stand so it doesn't happen to their daughters.

Another option: Spread this message via articles, videos, social media. We have so many platforms to spread messages in a way that really sticks. I feel that the more respected people in a boy's life who share & encourage this ideology, the more likely he'll be to catch on.

Finally, I thought about electing leaders that put women's issues at a forefront. Then I thought, world leaders tend to be men & as you can see with a lot of the republican arguments happening down south right now, they are men with absolutely no fucking concept of women's bodies: 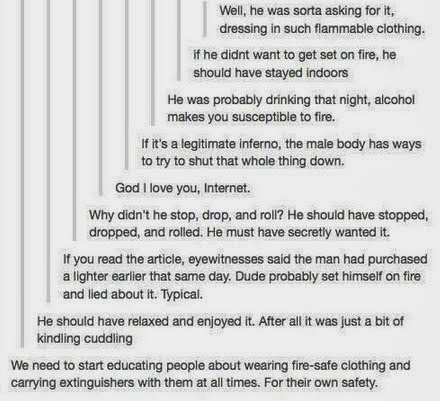 So I think we need to elect women leaders, and become female leaders.

Posted by Crouching tiger, hidden ginger at 11:46 No comments: