Greetings fellow bloglodytes from around the world, including Venezuela and The Philippines. I am the mysterious Mr. Ford and will first need to set the record straight. All stories about me in this blog up to date are all heavily exaggerated for entertainment value.  I am actually super smart, funny, responsible, nice-smelling and cool. However, the picture of me eating chicken wings with sauce all over my face is 100% legitimate. 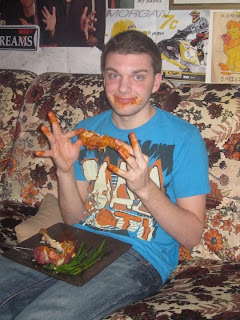 When she isn’t crouching or hiding, our favourite ginger is often watching one of her favourite shows, Sex and the City. 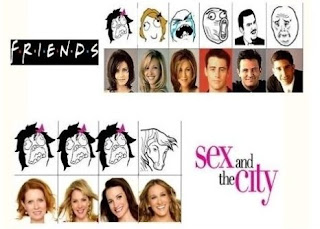 Since I spend a lot of time with her, I am subjected to watching the show with her. I’d like to think that I’m part of a large group of men that have to put up with Carrie, Samantha, Miranda and Charlotte.  Of course, I could be wrong and will get weird looks in the locker room at the gym from now on but when I’m sitting there watching SATC with the wife, I think of all of the other guys being subjected to the same treatment and don’t feel so bad.  For the guys out there, it’s like when you’re at Victoria’s Secret and you see another guy standing beside a fitting room, also holding a purse, and you give them a nod of sympathy as if to say “Good job, soldier. We’re in this together.” 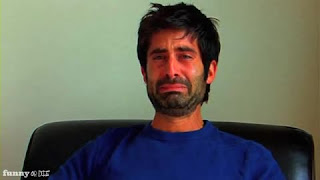 Now, at first, I was pretty opposed to the idea of watching such a dumb, girly show and put up a pretty big fight for the remote. Over time, the fight became a civilized protest, which slowly became a disapproving groan, which eventually became a question about whether the episode was before, during or after Charlotte’s marriage to Trey McDougal.

Since I used to complain a lot about watching Sex and the City, the wife LOVES to point out any moment when I appear to be enjoying the show or if I fail to stifle a laugh.  I’m only human!  Even Sarah-Jessica Parker is funny sometimes even if you need to sit through a day-long SATC marathon on Cosmo TV.

Considering the name of the show, there are maybe one or two instances of sex in each episode, if that.  False advertising?  I’m getting a whole lot more “City” than “Sex”. 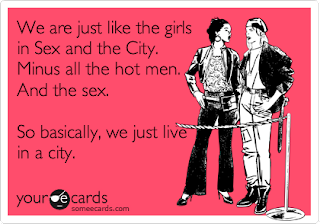 This show also seems to follow the same pattern that most shows fall into. The main characters aren’t devastatingly good looking but every week they have guys tripping over one another to talk to them and possibly bring the episode rating to 18+. The weirdest thing is that it actually works a lot of the time!!! These are adult, human females and they’re agreeing to have sex with adult, human males.  Sorry, HBO, but you’ve lost me with your bizarre fantasies.  That’s just not how things go down.

There are a few reality shows on Playboy TV where they get a few guys and a few girls together in a house with the goal of them having sex in some form or another and even then it doesn’t happen most of the time. The realest part of SATC is when the 4 middle-aged women go out to lunch and discuss their fears of dying alone and not being able to find a good man in New York because the good ones are either married or gay. 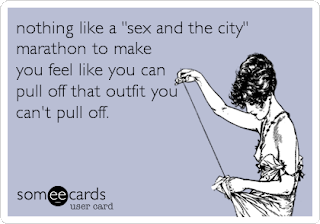